Bonham played exclusively on Ludwig drums for the duration of his career in Led Zeppelin. 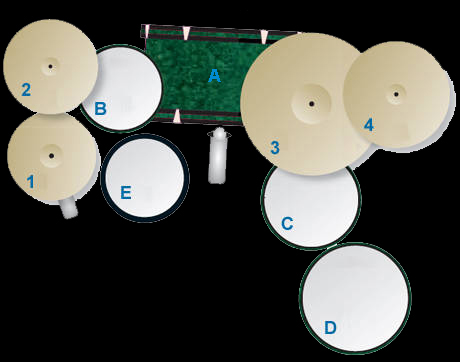 This format was also used by the big band legend Buddy Rich, one of Bonzo’s drum idols. 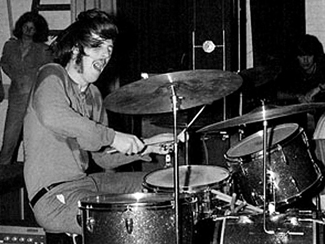 During his early drumming days in A Way Of Life and Band Of Joy, he played on a Super Classic four piece Ludwig kit in Sparkle Green (Ludwig finish number 2004). It had the following specifications:

Led Zeppelin toured the US from December 1968 until the spring of 1969 often playing on the same bill as the psychedelic rock band Vanilla Fudge, whose drummer Carmine Appice used two gigantic 26inch Ludwig bass drums. This setup clearly had an impact on Bonzo, who soon after securing an endorsement deal with Ludwig in 1968, ordered two 26x14inch bass drums, a 22inch bass drum with specially adapted metal rims fitted for use as a huge floor tom, a 18x16inch floor tom and a 15x12inch marching tenor drum to be used as the small tom. 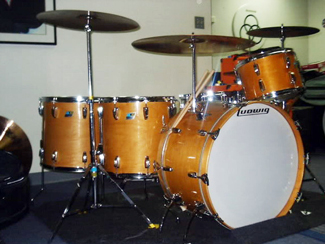 Made up from the following maple finish Ludwig drums:

The shells had reinforced rings. According to Paul Thompson (Welch & Nicholls 2001, p. 136) Bonham got the kit just before the Led Zeppelin II album was recorded, so it would have been used to record ‘Whole Lotta Love’ and ‘Moby Dick’. 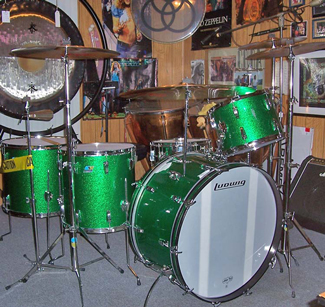 Bonham returned to using the green sparkle kit (used in his early days – see above) in 1970:

John apparently told his band mates that this was his favourite sounding kit.
Jeff Ocheltree (John’s US drum tech), says that “following on from the natural maple kit, John had three green sparkle kits, and that he used them on about four albums – presumably Led Zeppelin III, IV, Houses Of The Holy, and Physical Graffiti.” – (Welch & Nicholls 2001, p. 136) 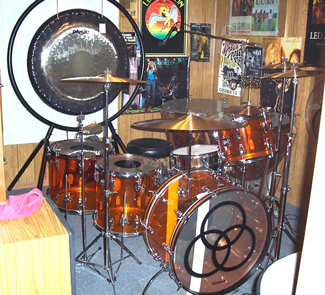 1973 saw the launch of Ludwig’s distinctive multi-coloured Plexiglas-shelled Vistalite drum kit range. Bonham pioneered the use of this new kit in the same year it was released, choosing the Amber coloured version. Bonham can be seen playing this kit with the three intersecting circles symbol on the front of the bass drum in the Led Zeppelin film ‘The Song Remains The Same‘. Due to the plastic nature of this range, the Vistalite’s gained a reputation for cracking. This kit maintained Bonzo’s usual format:

This kit differs from Bonham’s other previous kits in that it uses full length tension lugs which would have helped increase the volume. This was to be Bonham’s final stage kit, which he can be seen playing on in the 1979 Knebworth video footage of Led Zeppelin. It was used during the following two Led Zeppelin tours: Presence and In Through The Out Door.